The cover for Diary of a Wimpy Kid: Big Shot has been revealed!

After a disastrous field day competition at school, Greg decides that when it comes to his athletic career, he’s officially retired. But after his mom urges him to give sports one more chance, he reluctantly agrees to sign up for basketball.

Tryouts are a mess, and Greg is sure he won’t make the cut. But he unexpectedly lands a spot on the worst team.

As Greg and his new teammates start the season, their chances of winning even a single game look slim. But in sports, anything can happen. When everything is on the line and the ball is in Greg’s hands, will he rise to the occasion? Or will he blow his big shot?

Preorder now to be amongst the first to receive your copy – on sale 26th October 2021! 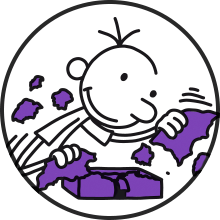 We’ve teamed up with Waterstones for an exciting virtual event with Jeff Kinney! Jeff Kinney will be talking about Diary of a Wimpy Kid: The Deep End, the brand new book in the internationally bestselling, laugh-out-loud Diary of a Wimpy Kid series. There will also be a chance for Jeff to answer your questions! Tickets £5, or £10 […]

Dive into The Deep End with the BRAND NEW Wimpy Kid book. When Greg Heffley and his family hit the road for a cross-country camping trip, they’re ready for the adventure of a lifetime. But their plans hit a major snag, and they find themselves stranded at a campsite that’s not exactly a summertime paradise. Things only […]

The Deep End is out now!

Would you like win a family portrait drawn by Diary of a Wimpy Kid author Jeff Kinney?! Puffin Books have teamed up with PizzaExpress to bring you Story Explorers, a brand new Piccolo experience at PizzaExpress to get the kids creative. Head in to PizzaExpress over the next few months to get the new limited edition Piccolo […]

Win a portrait of your family drawn by Jeff Kinney!

YESSSS!! DOUBLE DOWN IS OUT TODAY!! Have you got your copy yet? Konrad and Eliy have! WIN a family trip to New York! Get your hands on a stickered copy of Double Down (available in all good bookshops and online) and keep hold of the receipt for the chance to enter this awesome competition! More info […]

DOUBLE DOWN IS OUT NOW!